Taipei – I love that place.
Full of friendly people, divine street food everywhere, there is always something interesting to watch on TV (I’m secretly amused by how they tend to exaggerate everything; even the news is often slightly dramatised :p), and oh, the shopping!

On my recent trip, I finally had the opportunity to step out of Taipei and venture into Yilan.
The four days spent in Yilan had totally changed how I would answer the question “How is Taiwan like?” from now on. Before I even begin, I would like to specially thank my amazing tour guide Ken Wu, 工頭堅 for bringing us around Yilan and tirelessly sharing the history, his personal experiences and stories about his country and insights about life as a Taiwanese. The conversations with the locals were also always delightful!

Before the Yilan leg, I spent 3 days in Taipei with Taiwan-addict Sharon. But before I begin proper on what happened while in Taiwan, I would like to dedicate this post to the very impressive Taipei Taoyuan Airport and it’s spanking new metro system!

The newly open Taoyuan Airport Metro (opened less than a year ago!) took me directly to the city centre, in just about 40 minutes! For those of you who haven’t been to Taipei, this is actually a really big deal because it has made the journey from airport to city SO much easier. One will no longer be at the mercy of bad traffic or fear of worrying about splitting up into groups to fit into taxis if you’re travelling with a huge bunch of friends! :p

My favourite thing about the airport express, however, was how I was able to check-in my baggages in town and make my way to the airport without lugging things around.

On my way back to the airport from the city, I learnt that there is also a bag drop service made available along with the new Taoyuan Metro service! On top of the prompt and reliable transit from city centre to the airport, you can now check-in your bulky baggages directly at the service counters in city centre and take the metro without the hassle of having to lug those big bags around.

This is how it was like at Taipei Main Station that was located in the city centre. Scan your passports, leave your bags, and then take the metro to the airport directly! It is really as easy and seamless as that! 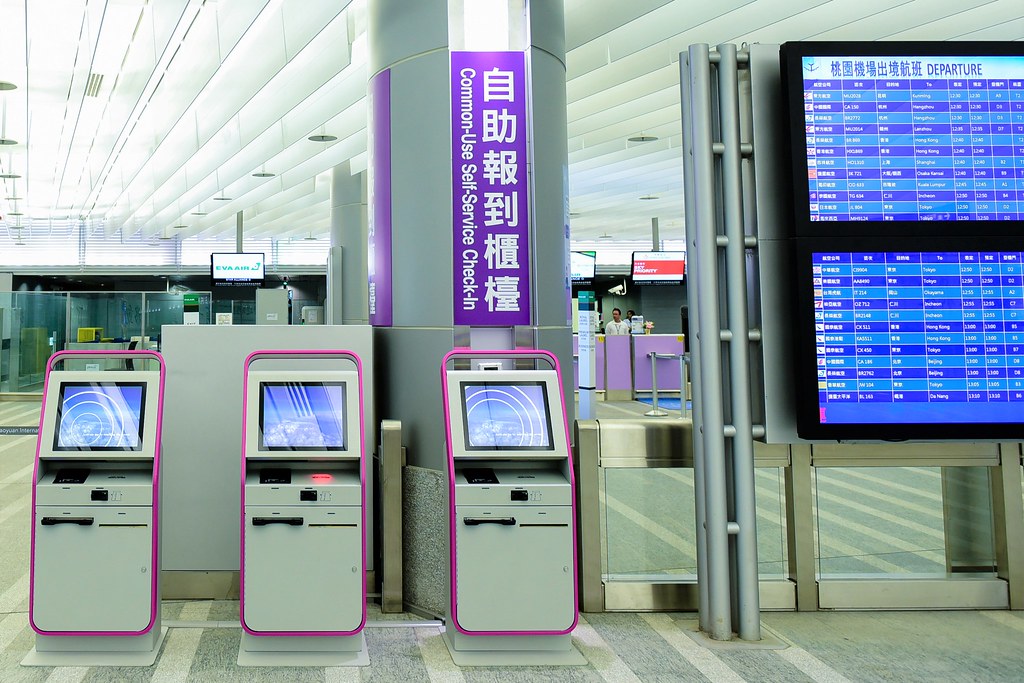 The express trains were clean and comfortable to be in, but what’s more important is that the travelling from Taipei city centre to Taoyuan Airport is now made so convenient, reliable and fast. 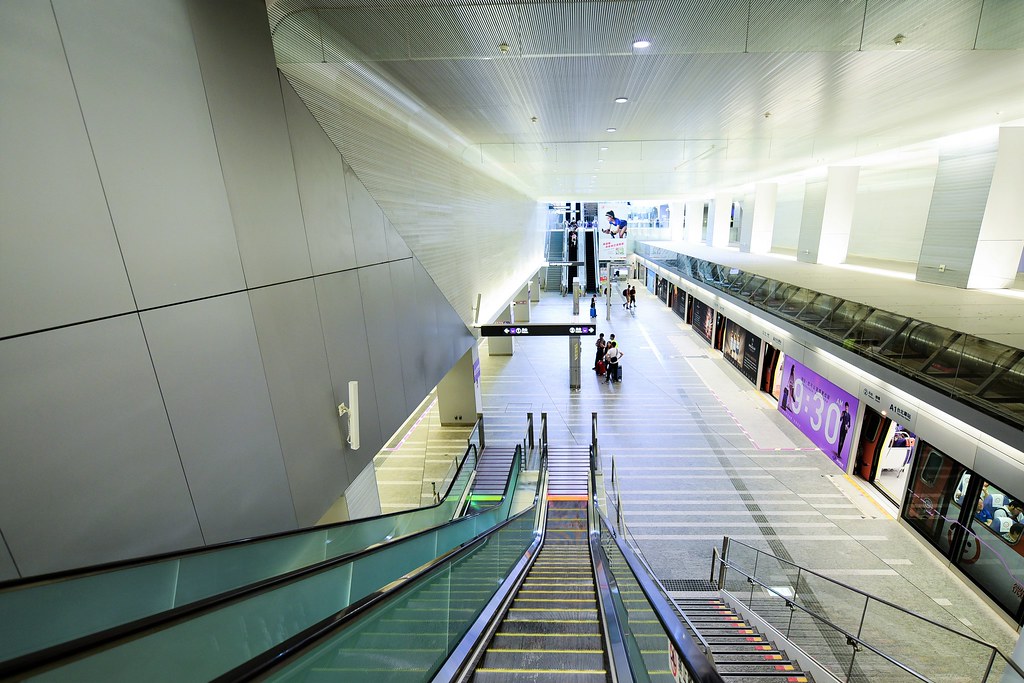 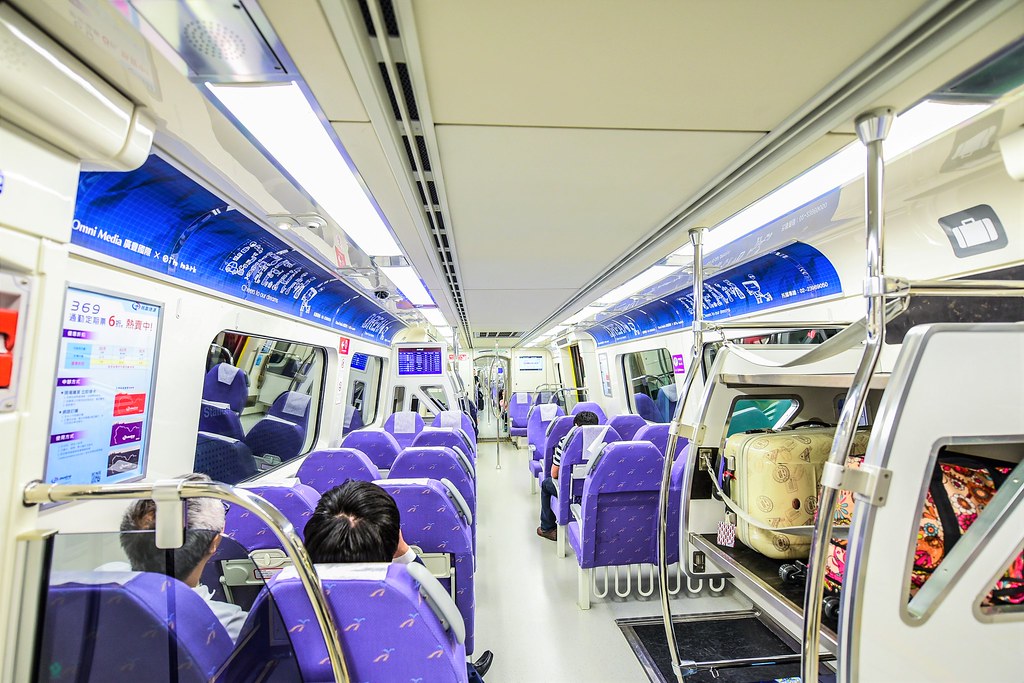 The Taoyuan Metro service runs from 6am in the morning all the way until 11pm at night everyday. They also have two different types of trains (express and commuter) which leaves every 15 minutes. To be honest, both trains are equally fast. An express train takes 40 mins from Taipei Main Station to the airport and a regular commuter train takes about 50mins. So there is absolutely no need to worry about missing trains or long waits at the stations.

The train stops at all terminals in the airport as well:

And for those of you who prefer a more pictorial overview: 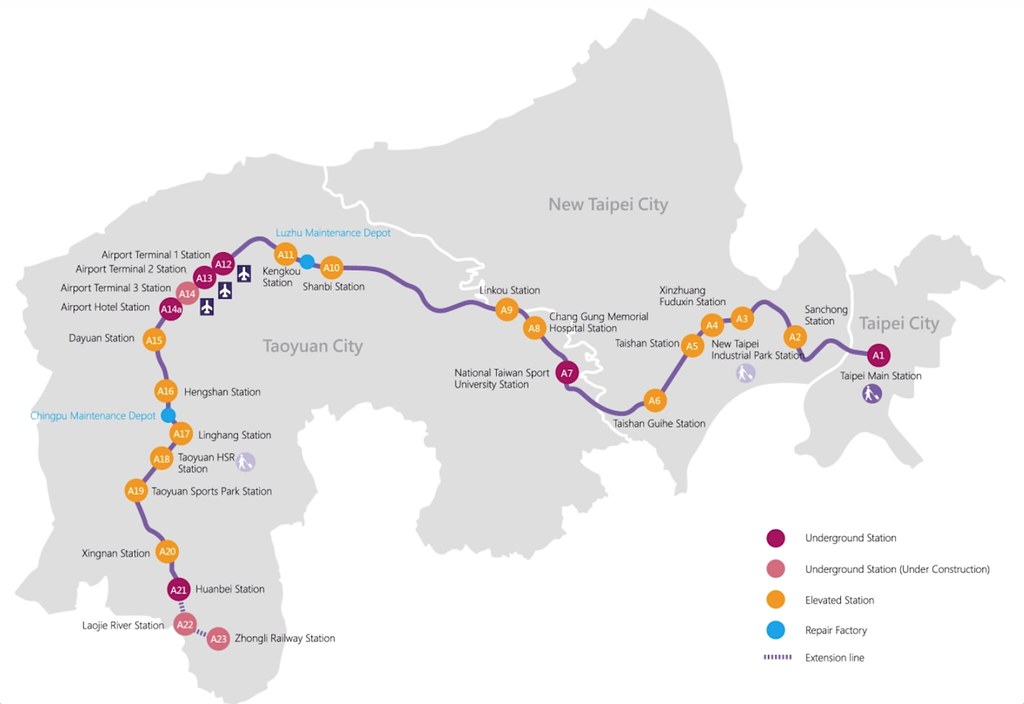 And the price for a trip from Taipei Main Station to Taoyuan International Airport? An affordable NTD 160 (which equates to about 7 SGD).
Here are also a few pointers for those of you who are looking at the In-town check-in and baggage drop-off service available in the city centre:

I guess the new addition of AirAsia to the list would be a good news especially for us travelling over from Singapore since it’s quite a common airline to fly with for the locals. But seeing how new the metro system is now, I’m very certain the list of airlines the In-town Check-in service supports will be growing significantly in the near future.

And till then, safe travels!