I have never thought that I would visit Estonia one day.

As much as I’m concerned, “Europe” to me was pretty much Paris, Italy, England and other more-touristy cities – places where a lot of my friends have been, and I know it would be relatively safe-ish if I head back to my apartment early. There are also lots of stories shared among my friends and relatives, so these countries are somewhat more familiar for me. Eastern Europe, on the other hand, gave me a very different impression compared to Western Europe. I always thought that Eastern Europe is poorer, more rundown, more backward and somewhat more dangerous. But in my recent visit to Tallinn in Estonia, I have totally changed my take on Eastern Europe. Tallinn has got to be one of the most beautiful, magical and enchanting cities I have ever been to. And one that I would visit again in a heartbeat, any time!

First and foremost, I am lucky to be able to stay in the heart of the city in Tallinn. My apartment is at Pikk Street which is right in the middle of all the action in Old Town. There are unless shops (both medieval and modern looking ones), restaurants, bars, souvenir stores and beautiful churches all around us. The entire city centre looked just like a theme park like Disneyland! I really couldn’t believe my eyes on the first day when I took a stroll around the city. It was really breathtakingly beautiful! 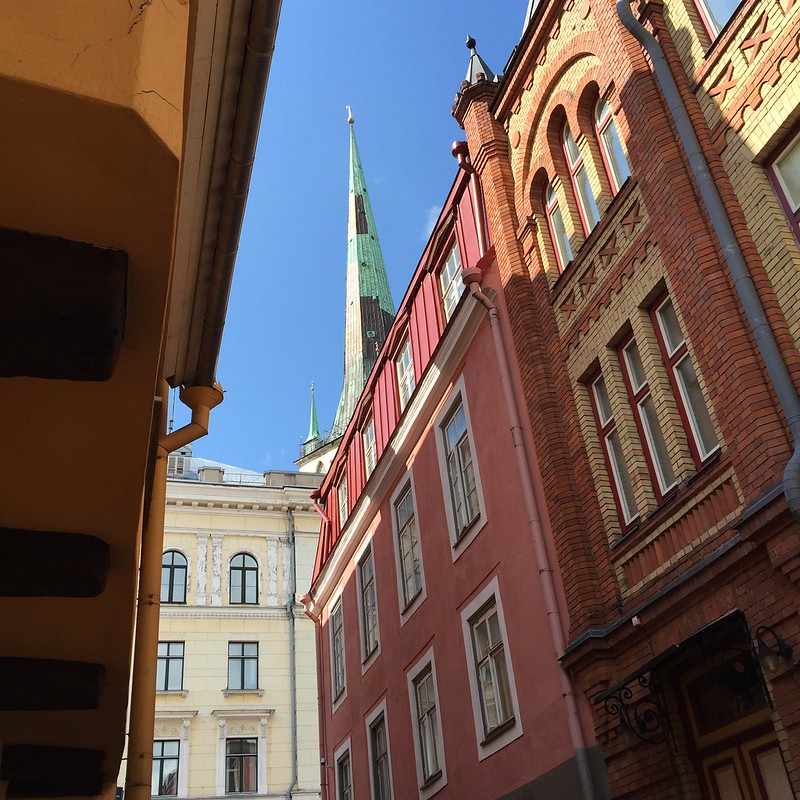 The city was full of vibrant colours, the people we met in and outside of the main touristy Old Town area all spoke good English. Getting around within the Old Town was easy because everything is easily accessible by foot. We were there in Spring so the weather was comfortably cool. Just talking about Tallinn now makes me want to go back there right away!

We had a great apartment host who was also a part-time tour guide around Tallinn. She took A and I around Old Town area and introduced the city to us in the short 40-mins tour. She said that Tallinn, the capital of Estonia, looked totally different a few decades ago because it only re-gained its independence from the communists in 1991. It was only in this recent 20 over years when the country grew and prosper rapidly. Now, the city is modern and advanced, and full of happy and friendly people who appeared to really love the Old Town and take pride in what they do. I saw some photographs of Tallinn in the 80s and it was really a far cry from what it is today. With that, I really respect the Estonians for what they have achieved! 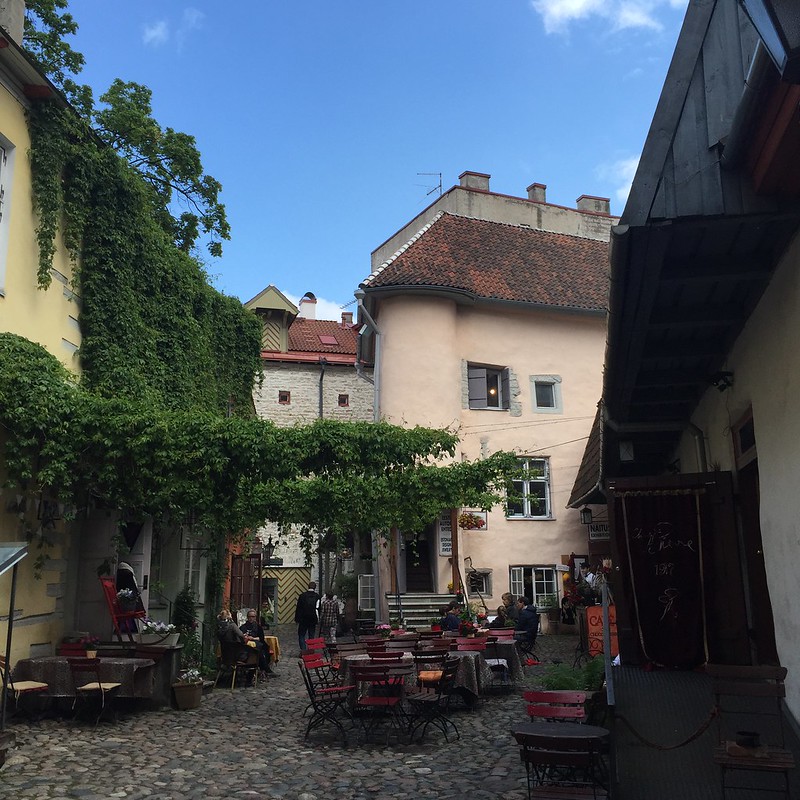 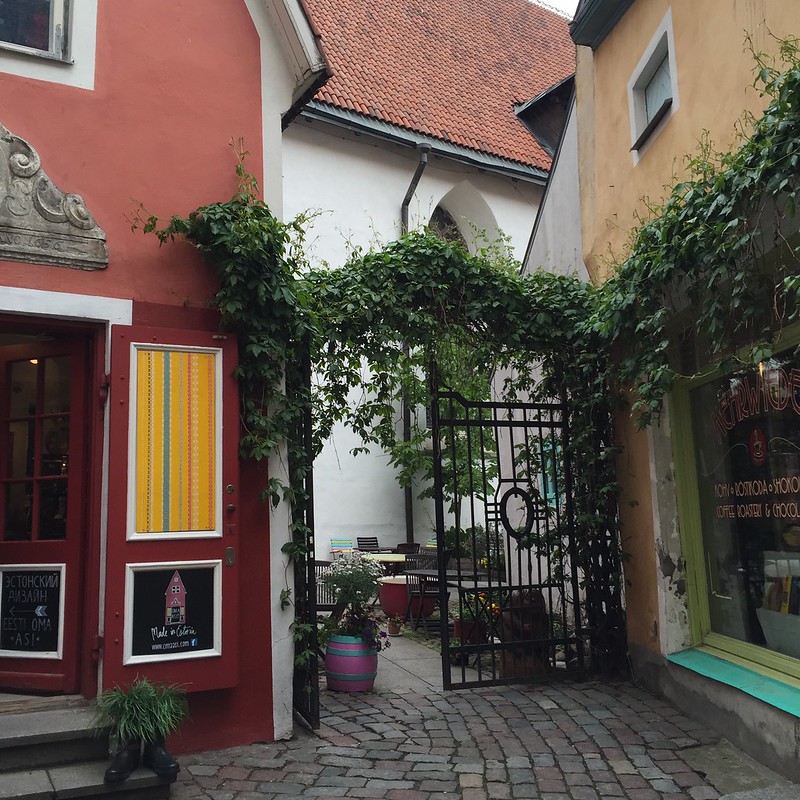 As many of the buildings in Old Town was actually built in the Viking Ages, we also got the chance to see pretty little spaces like this one. 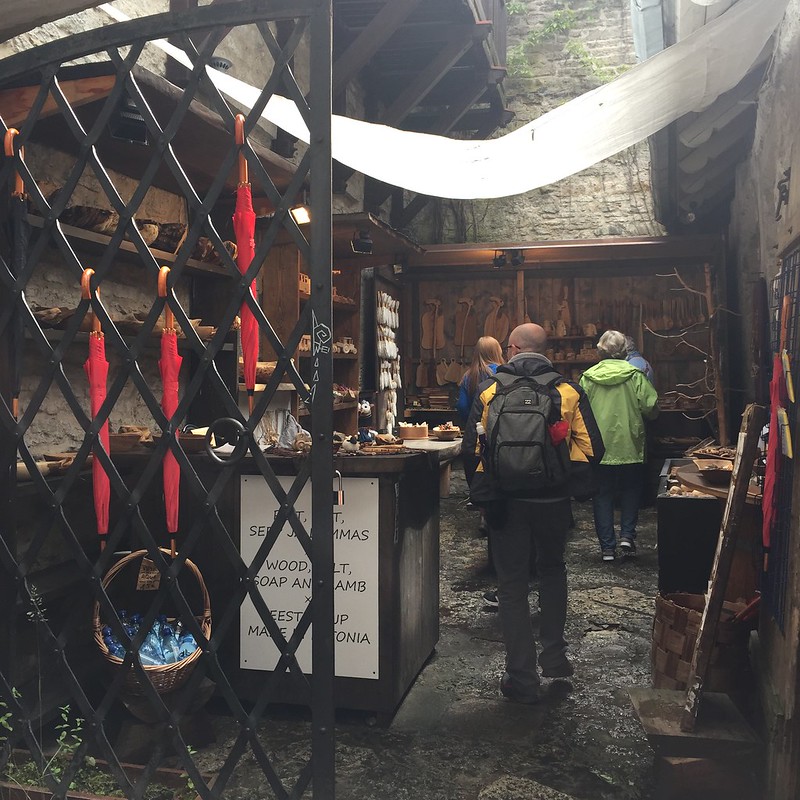 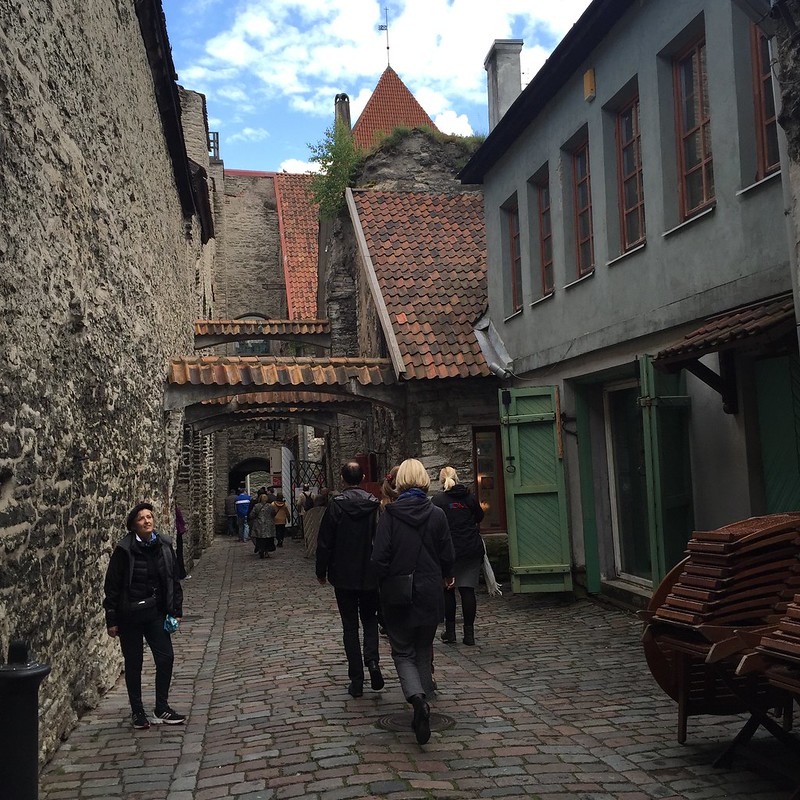 Other than the medieval Old Town and Raekoja Plats which is the old square in the area (by the way, this square transforms into the most beautiful Christmas markets during Christmas. So if you’re looking at visiting Tallinn around the festive seasons, don’t miss it!), there are a few other must-go sights which are just a short leisure stroll away and Toompea Hill is one of them. In there, you’ll be able to have better knowledge of city and its history. It is also an extremely picturesque place and, I believe, looks beautiful in different ways in the different seasons.

A kept saying she felt like she was in the set of King Arthur when we were there. Hahahaha! (But she’s right lah) 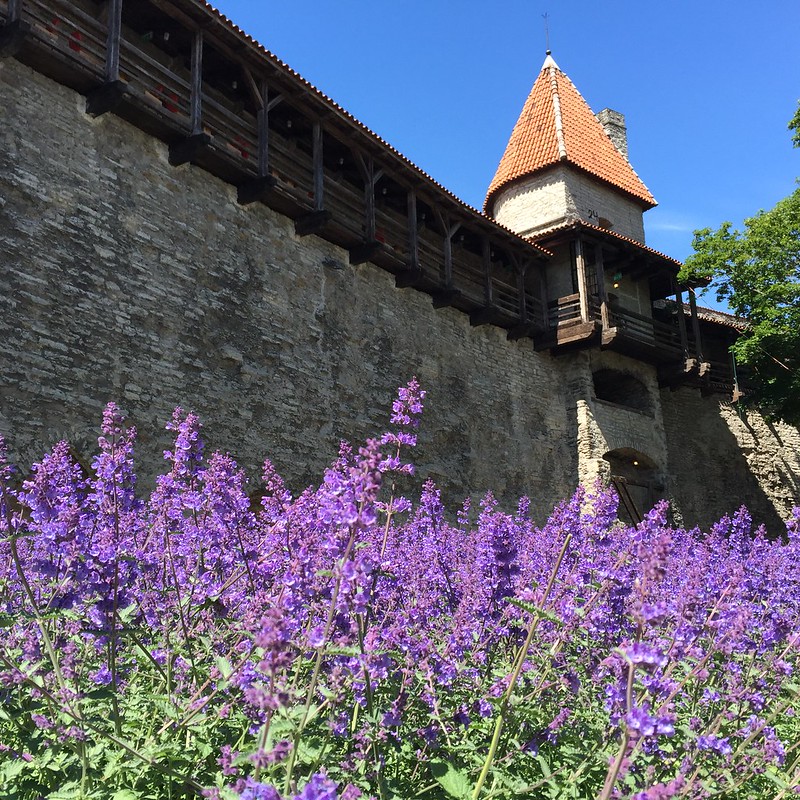 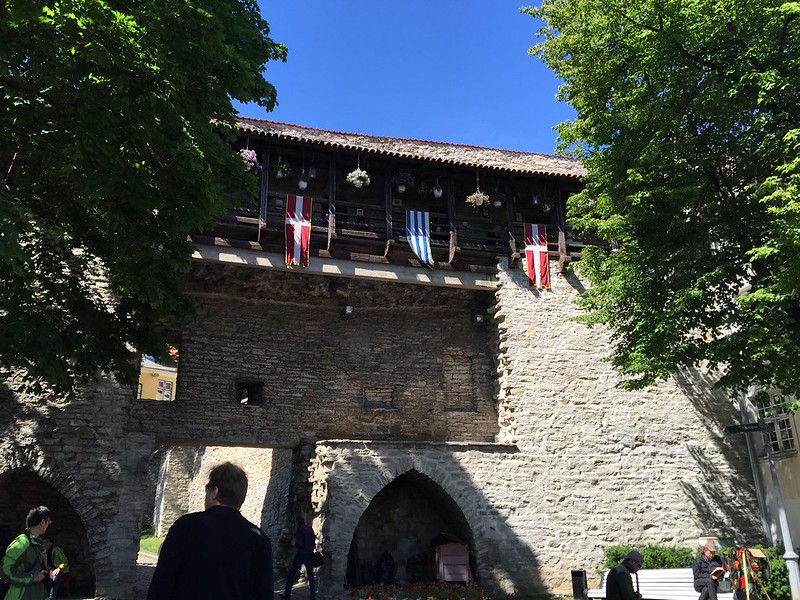 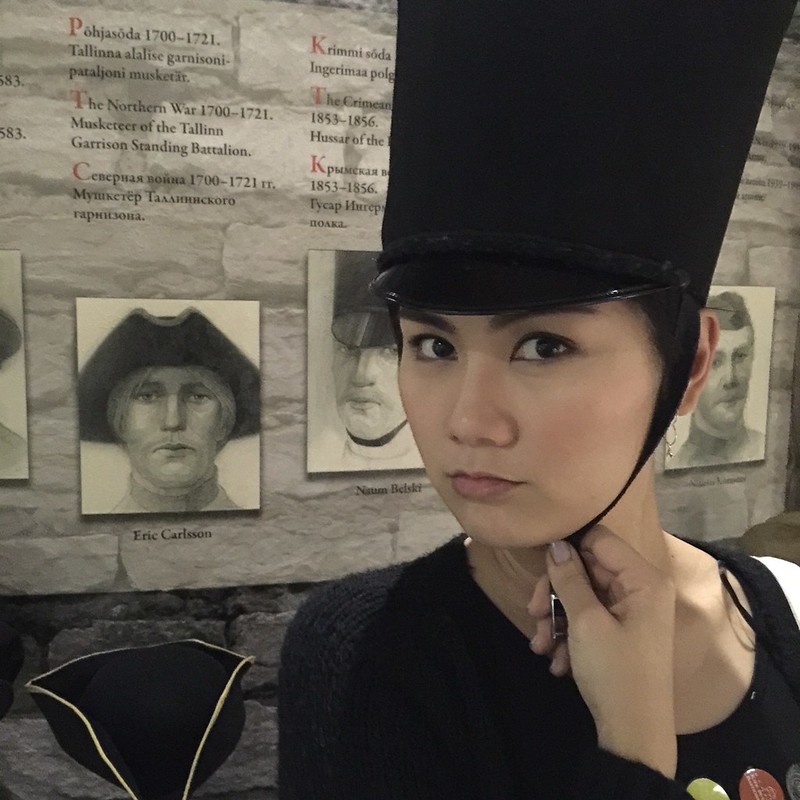 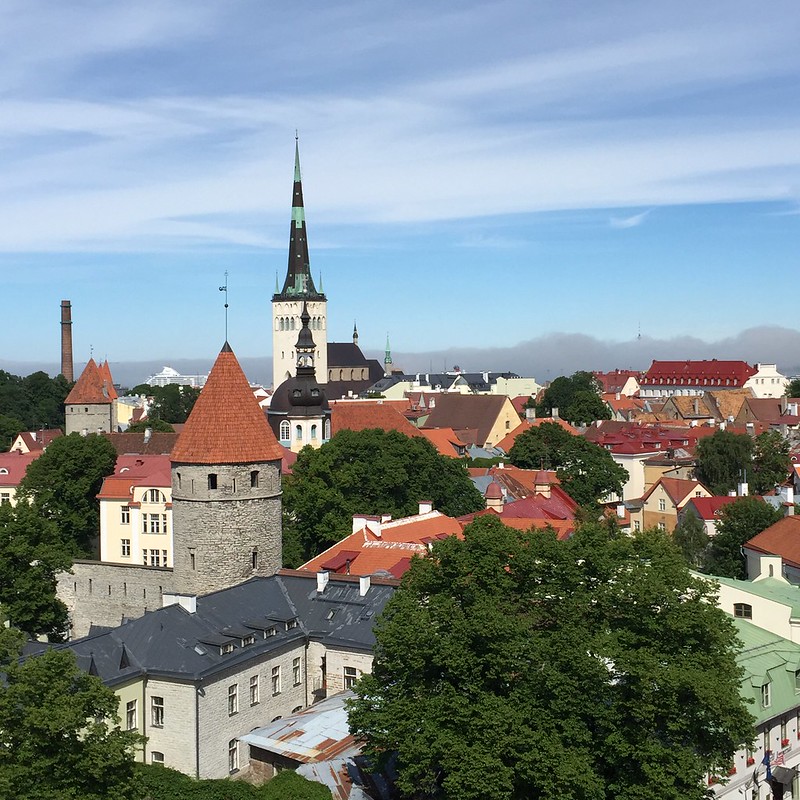 The view from the top of Toompea Hill was great too!

My favourite part of Old Town, however, is the colourful doors and pretty decorations on the window frames and doorways at every corner I turn. I guess the Estonians in Tallinn must be really happy, how can one ever get gloomy in such a beautiful town painted in pretty pastel hues? 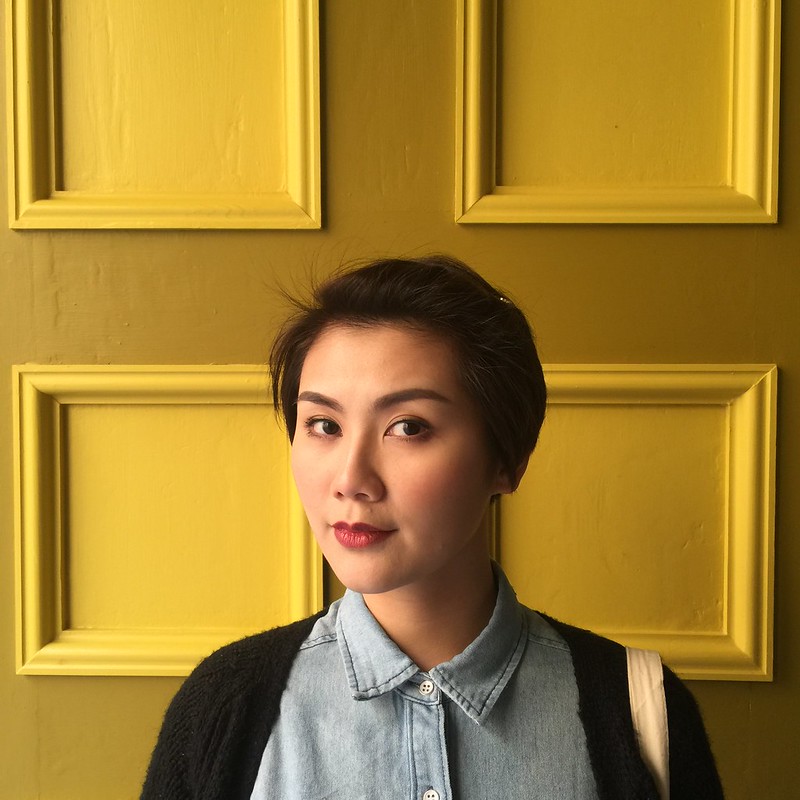 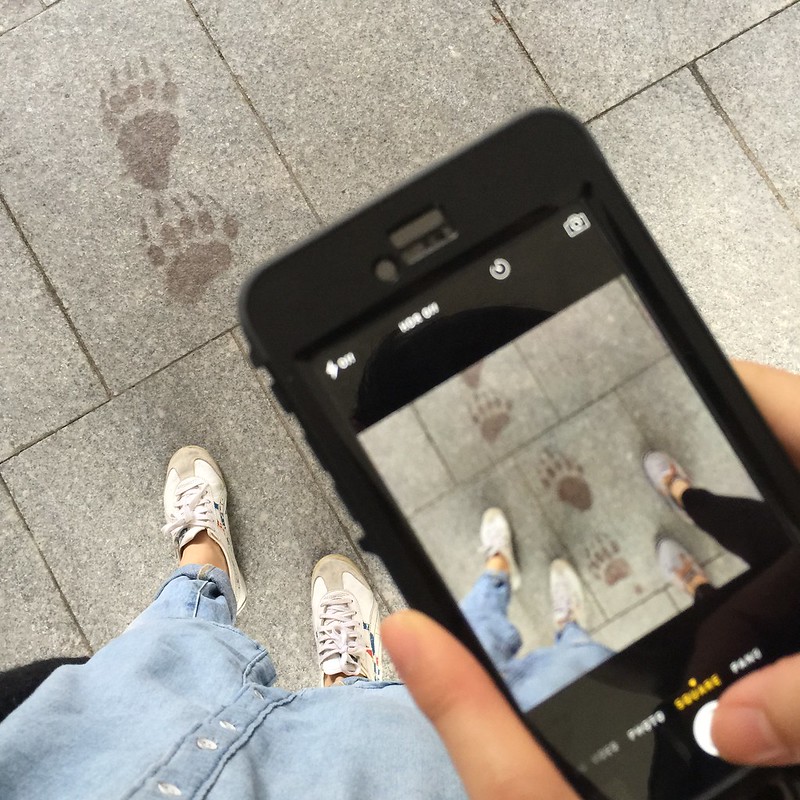 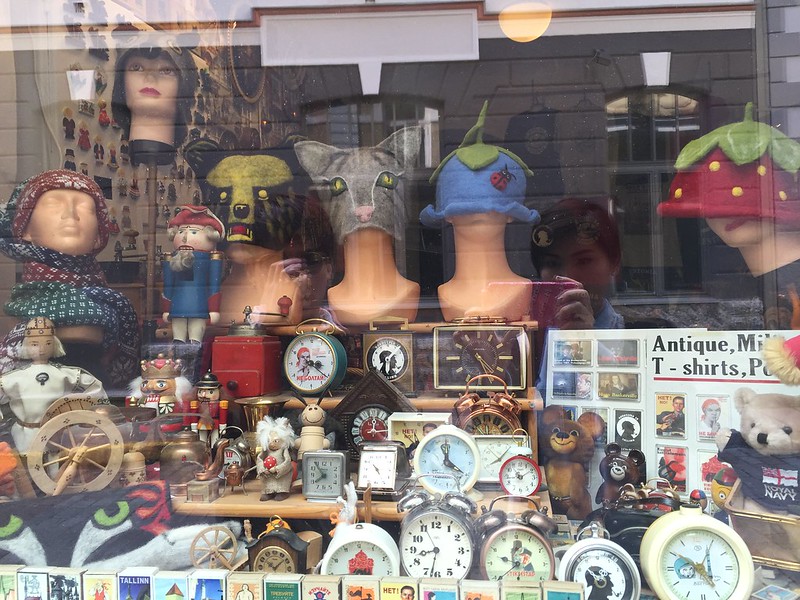 I also spotted that they were selling me favourite soup. Haha! 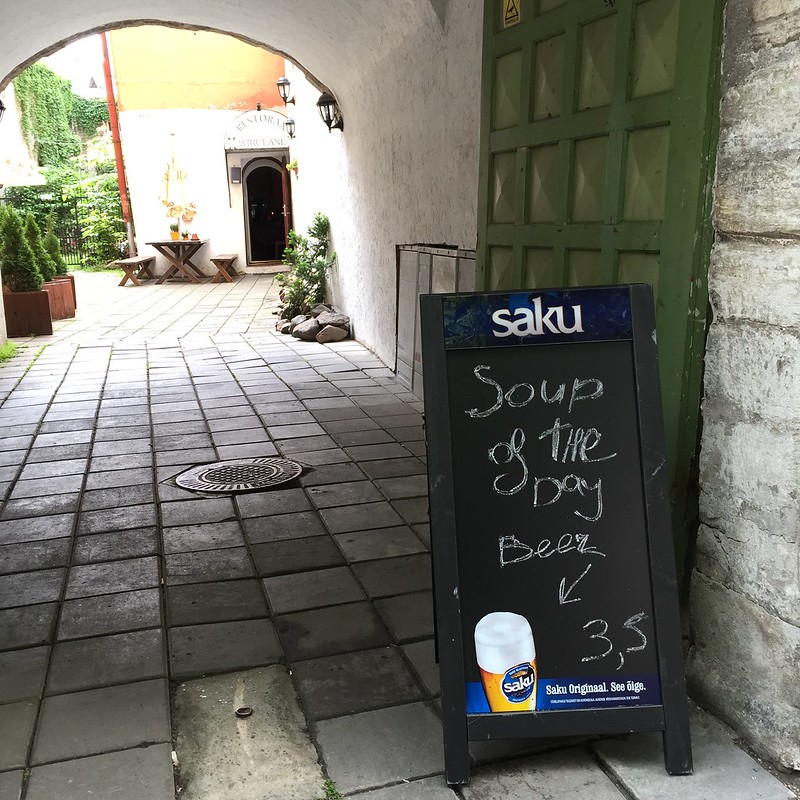 As we were only staying in Tallinn for 3 days and we got in to the city in the afternoon on the first, we only had the opportunity to travel out of the Old Town for a day. We read about the Telliskivi District online and saw some really pretty pictures of the hippie cafes there so we decided to visit! Unfortunately, it was a little difficult to get there because we stupidly decided to walk. Haha! If you looked at the map, you would realise that it really isn’t that far. So if you’re going there, I’d suggest that you grab a taxi or something because it really isn’t too expensive. However, because of all the walking, we managed to look at more things and we even chanced upon a flea market at the main train station! That said, their flea market is really kind of different from what I had in mind though; theirs was a bit more like the thieves market we have in Singapore.

When we were in Old Town, we saw many groups of tourists being led around the area and I believe most of them are only in Tallinn for a day trip from Helsinki in Finland. So if you are in Tallinn and want to take a boat ride to Helsinki, I think it wouldn’t be too hard too.

Ok, as I was saying, Telliskivi gave us an insight about Tallinn – that Old Town is the only place in the whole of Tallinn that looks like it came out of a storybook! Heh.

Although the outside of Old Town is considerably more run-down and less cleaned-up, it is still very charming in its own way. Hippie mah! :p 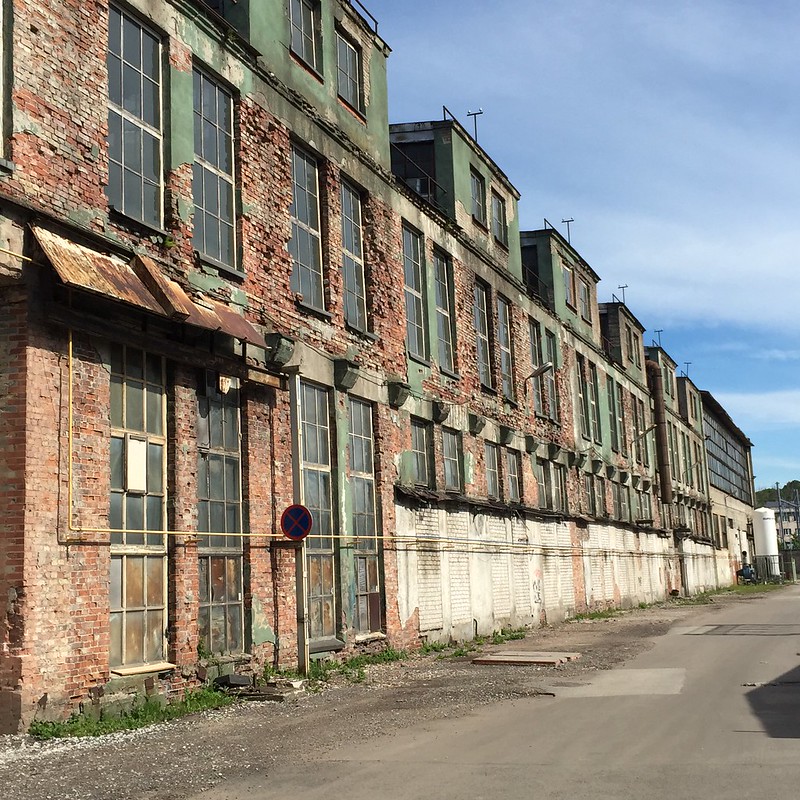 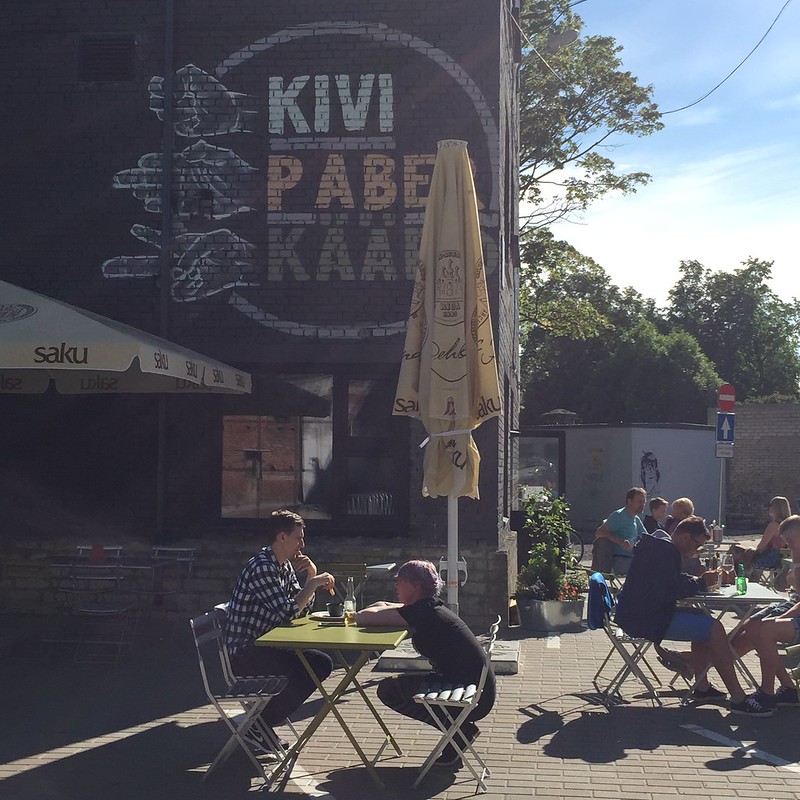 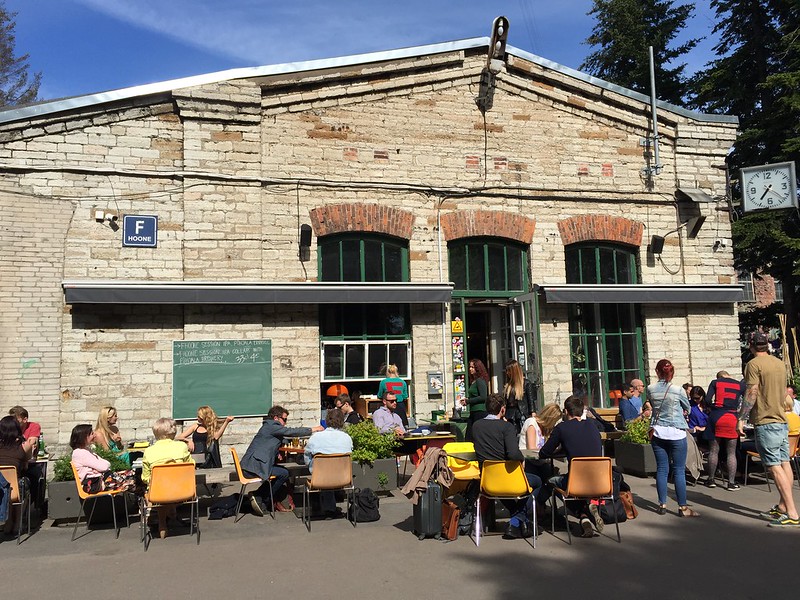 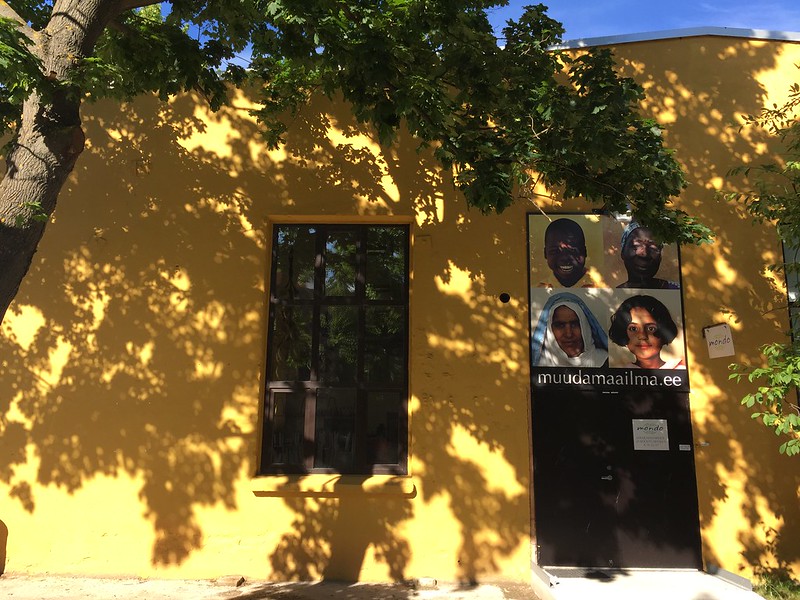 And this is the place that you HAVE to visit if you are ever in Tallinn. F Hoone! The food here was mind-blowing and the prices are really, really reasonable! The food they serve over here are really interesting and nothing like what they serve on the other side of Europe. I love the dumplings and the soups they have here in Tallinn. F Hoone totally nailed their coffee as well! 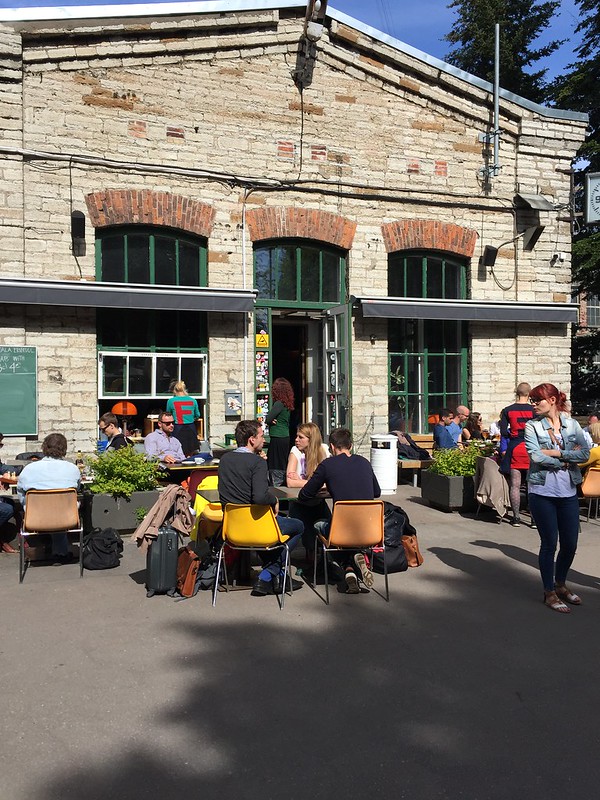 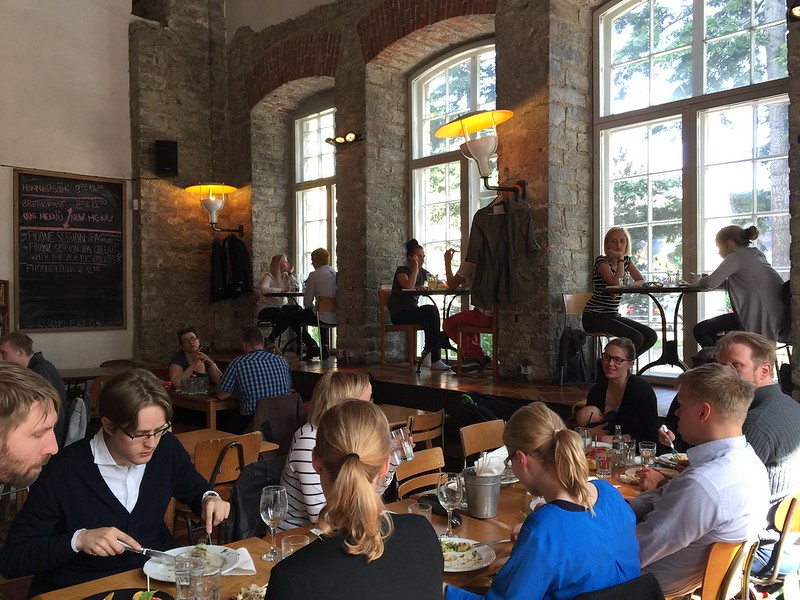 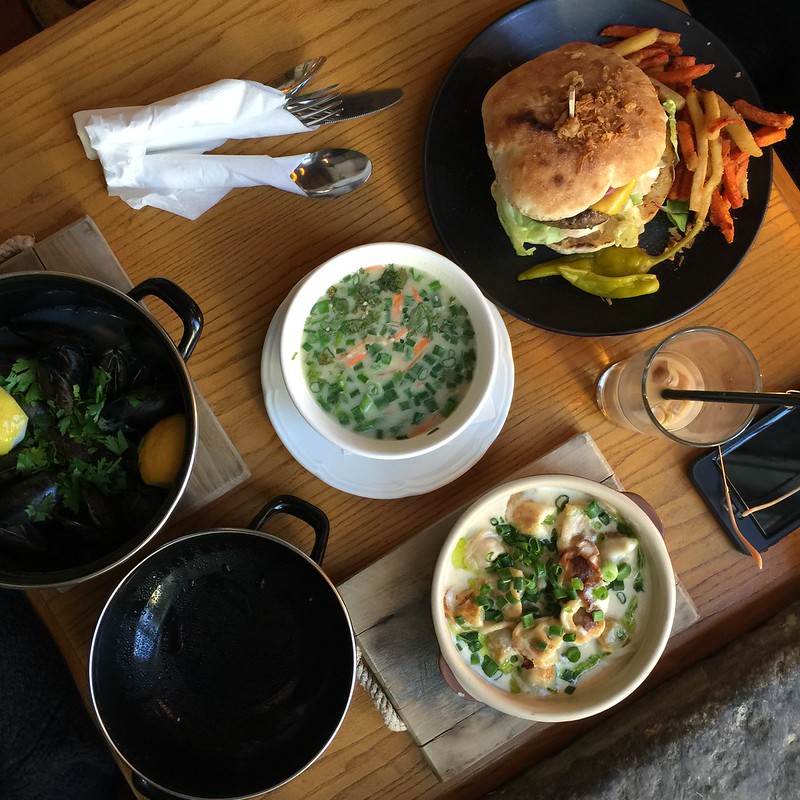 We had plans to thoroughly visit the Kalamaja, which is a seaside district, one of the oldest suburbs in Tallinn but we didn’t get to see much because it was getting late by the time we were done with Telliskivi. Would definitely want to visit the Seaplane Harbour if I had the chance to. Oh! On a sidenote, we saw advertisement signs for a few Escape Rooms when we were in Kalamaja District. Like Singapore, I think they love their Escape Rooms too. Heh! :p

Tallinn was the first Eastern European city I visited and it really changed my impression about Eastern Europe; it’s too underrated and I think I would want to go back and explore more of Eastern Europe in future if I had the time. Everything is generally much affordable compared to the popular Western European cities, and there is also no branded label shops to steal the limelight away from honest stores who sells pretty hand knitted dolls and sweaters. I took a little part of Tallinn away with me, and it came in the shape of the gorgeous Tourmaline ring with beautiful carvings all around. 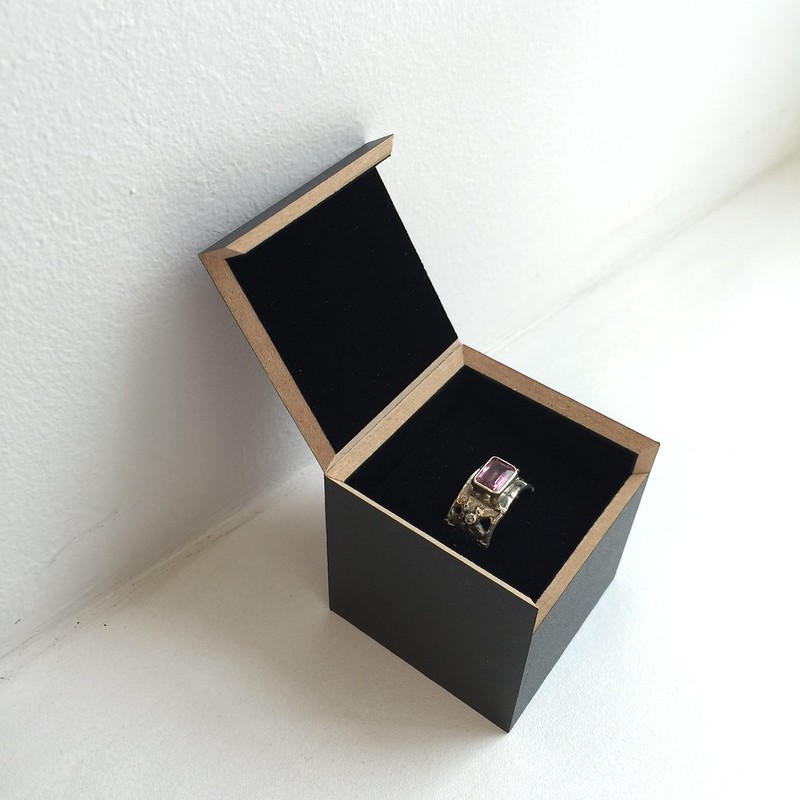