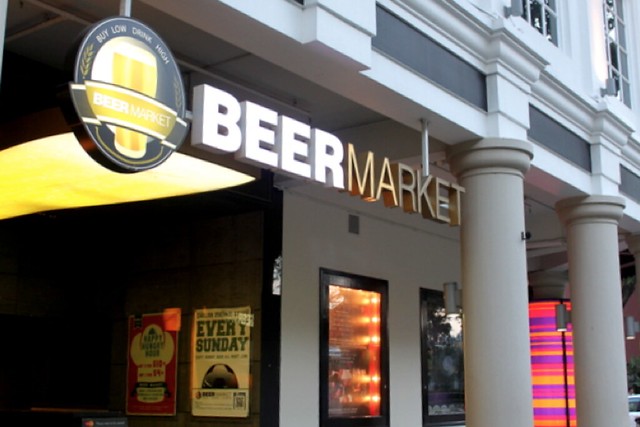 Wednesdays are my favourite because I get a take a short break from the café operations and
catch up with my errands and use the free day to meet up with friends!
This time round, we headed over for some food and drinks at Beer Market at Clarke Quay. 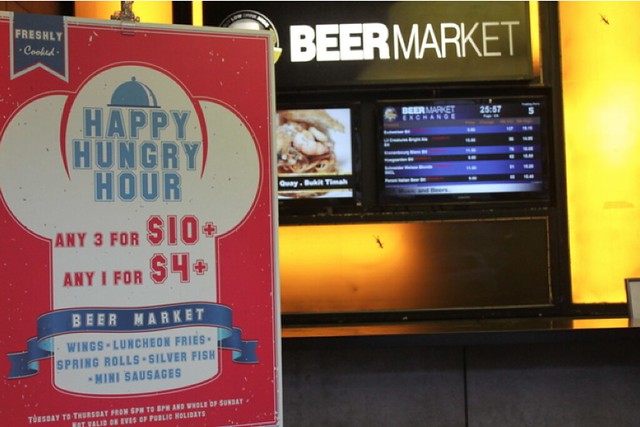 I’ve heard a lot about Beer Market before but have never ever been here.
I always hear my colleagues at The Tiramisu Hero mention about how
it’s really fun to watch the “stock exchange” screen for the prices of the beer and buy the booze
when the time is right.
I think it’s a really cool concept – especially for bargain-hunters and adventurous people who
don’t mind trying out different beers (at a good price!) *excited*

For those who are not sure about how the “stock exchange” works,
the prices of the beer actually fluctuates according to the sale of the beers.
The prices are adjusted every half an hour. So if a particular beer is very popular and
had good sales over the half an hour period, the prices will increase in the next time slot.
Similarly, prices will plummet for some beers too so it’s really interesting to just watch the “market”
for a while before placing your orders. 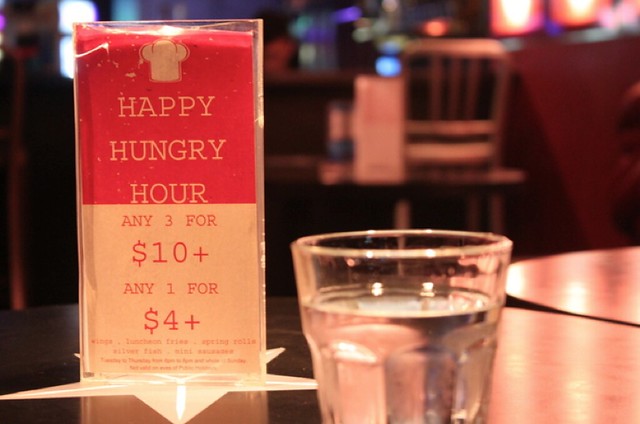 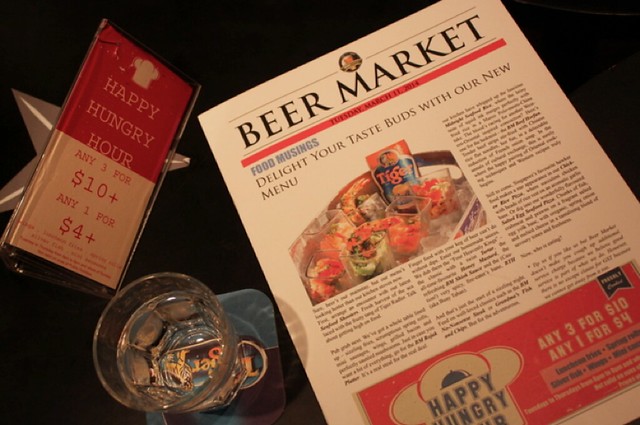 I know Beer Market must surely sell lots of different types of beer but
I didn’t know that they also have quite an extensive menu for savoury food and bar grubs! 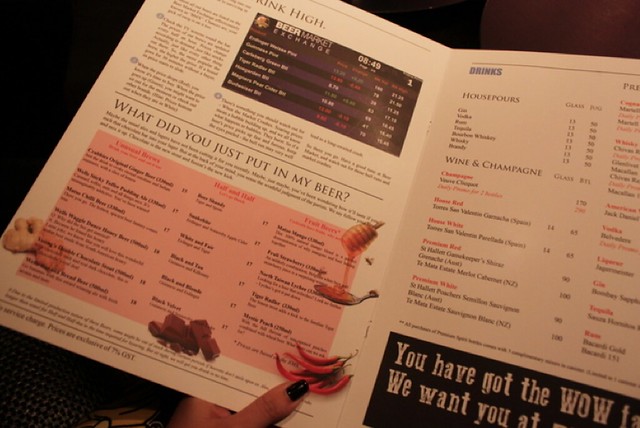 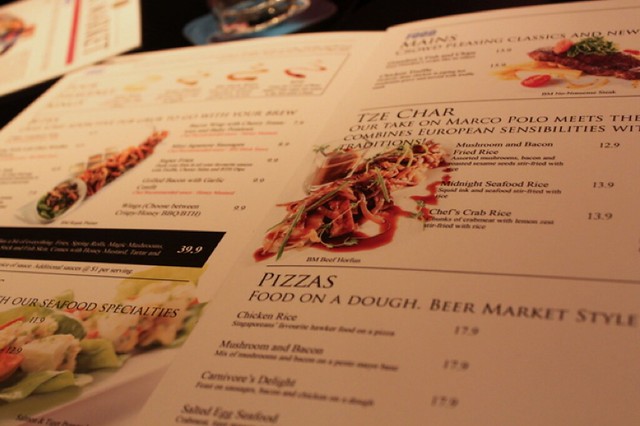 If you can vaguely see from the picture above, there is actually Chicken Rice Pizza for sale!
Cool aye? We settled for the Salted Egg Seafood Pizza instead because
A and Lianie are big fans of anything salted egg.
It tasted awesome combining salted egg with a mayo base on a crispy thin crust.
Together with generous serving of seafood such as crab meat, tiger prawn and fish chunks,
it was totally satisfying! 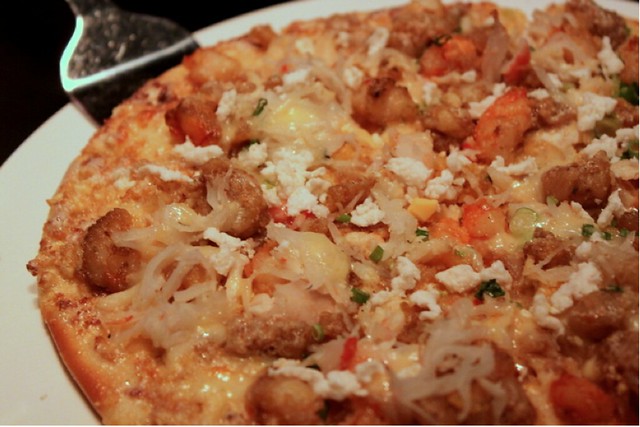 The folks at Beer Market Clarke Quay also recommended the fusion Beer Hor Fun, Rojak Platter and
the Seafood Shooters where you add in the new Tiger Radler into the shot glasses.
Interesting food pairing! 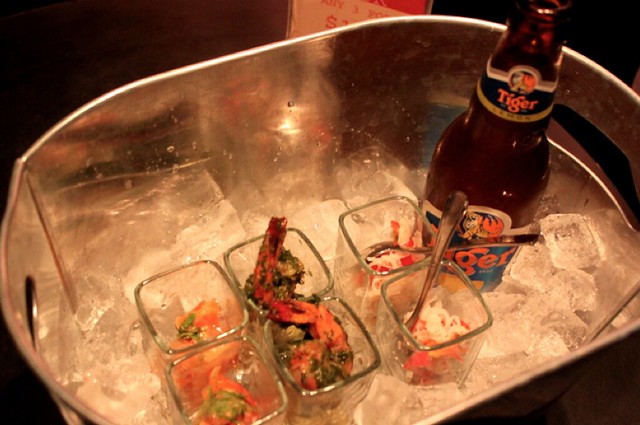 The Seafood Shooters was a really unique food-pairing dish!
The shooters tasted so different with and without the Tiger Radler.
And the best thing is – they already tasted very nice before the beer went in,
but after the Radler, there was an interesting sweetness to the shooters and it really complements the food! 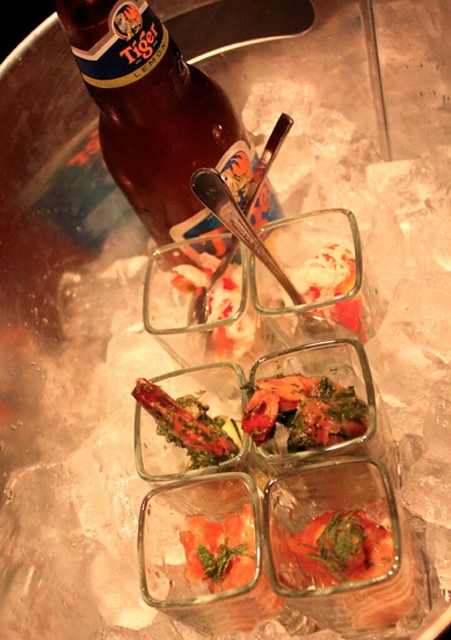 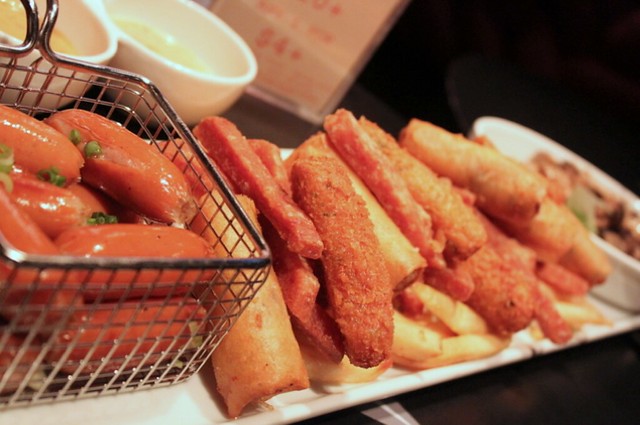 I LOVE the Beer Market Rojak Platter. All the bar grubs are available individually but
since we came in a bigger group, we reckoned it was more value for money to get a big platter!
Super yums! 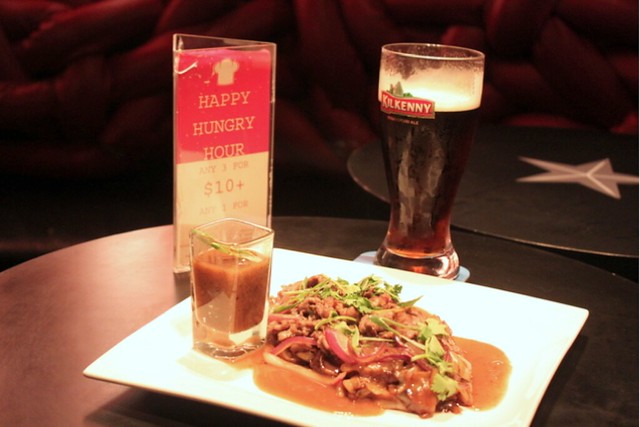 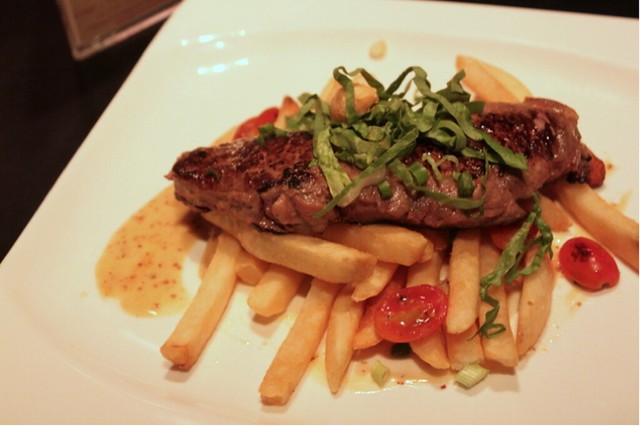 This is the Beer Market No-Nonsense Steak and it is really no nonsense!
The beef was done beautifully and it was oh-so-tender! Sadly we wanted to try a variety of food
so we only ordered one serving. We ended up all fighting to get our hands on more steak! Haha! 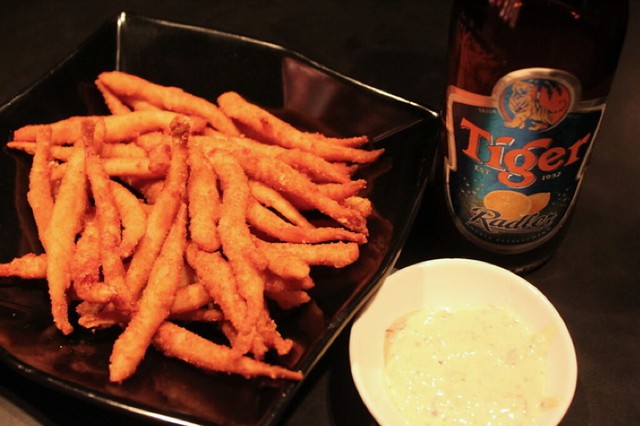 As for drinks, we all have our own favourites! 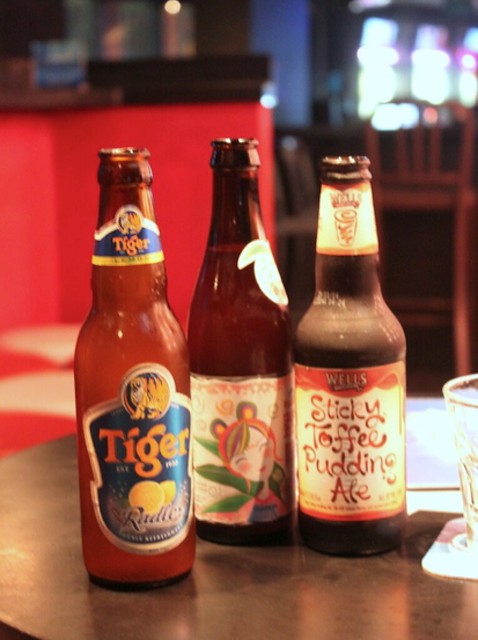 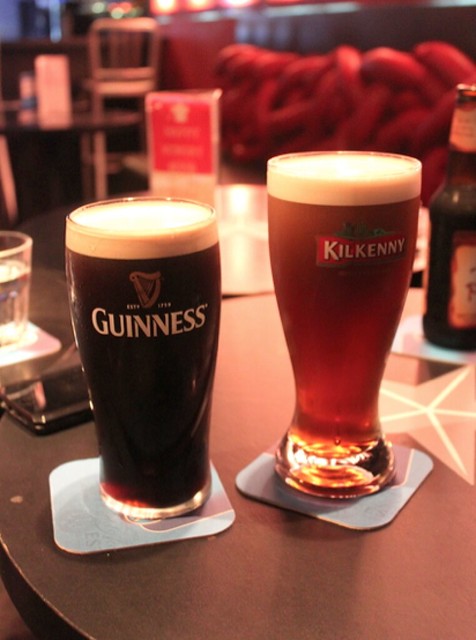 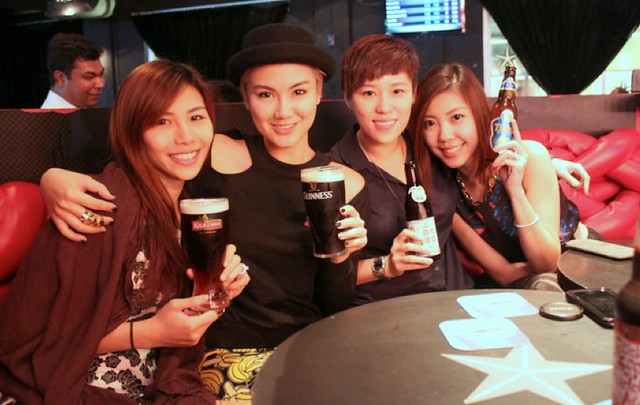 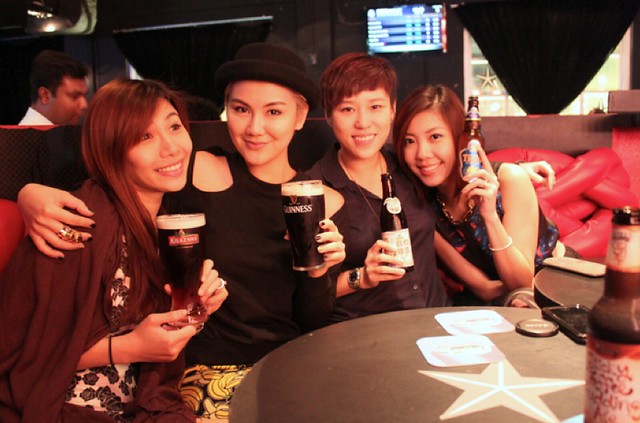 Oh did I also mention that we had one more ‘sister’ tonight? Hahaha.
Sinsin’s beau, LTK. 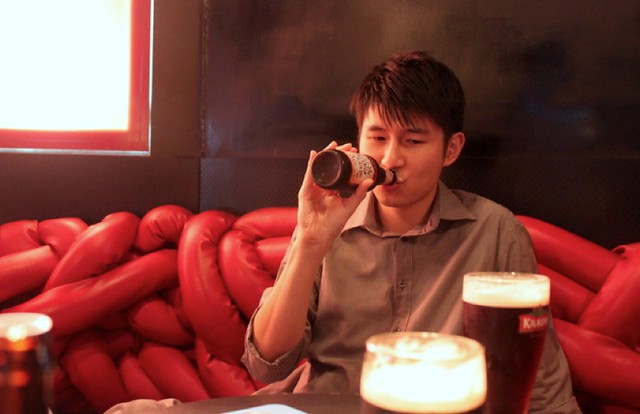 You’re out with a group of lovely ladies. Why so gloomy. Haha!

The environment was great and there was also a live acoustic band performing while we were there.
I understand from the staff that there are live performances every night!
Totally dig places with live music! *thumbs up* 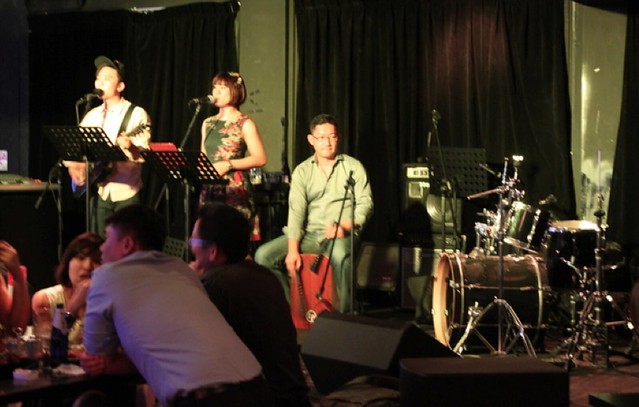 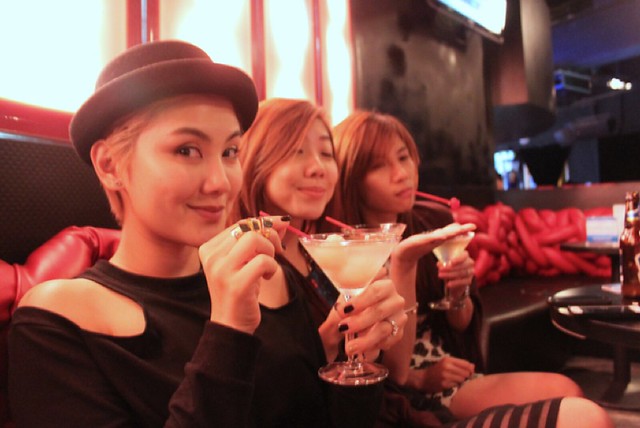 After the food was all cleared, we decided to end the meal with a couple of martinis.
I was thrilled to know that Beer Market do not serve only beer but also other cocktails,
spirits and even champagnes!

There are also many new beers like Double Chocolate Stout, Banana Bread Beer, Toffee Pudding Ale, Chilli Beer.
Yes you heard me right! Those are beers, not desserts! Interesting ya?
I guess one has to be gutsy enough to order a Chilli Beer. :p

For me, just a perfect Lychee Martini to end my night. 🙂 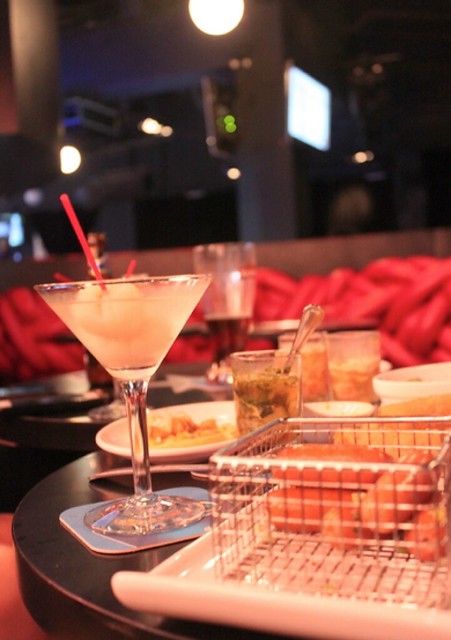 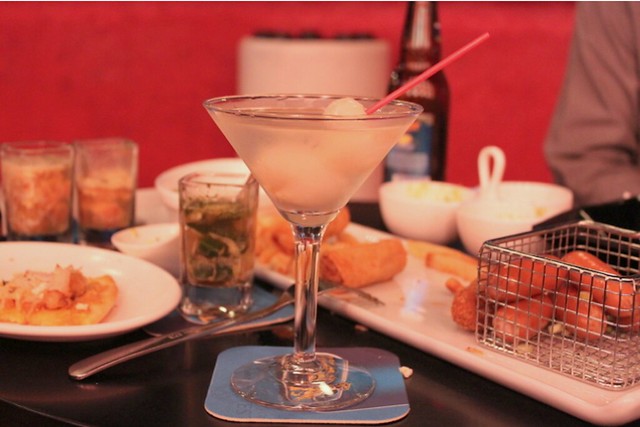 Thank you ladies for the great night out! Looking forward for more! 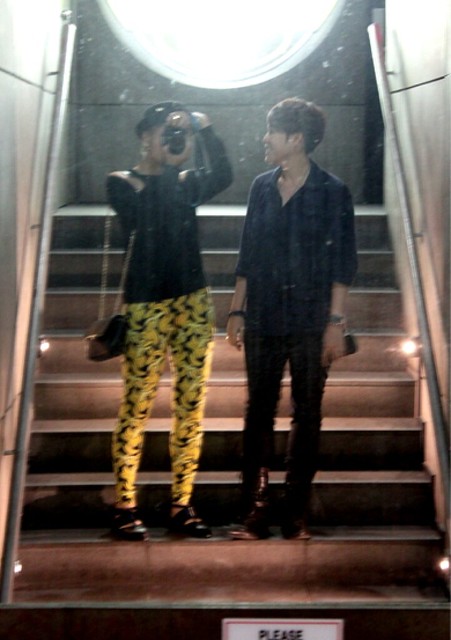 On a sidenote, I’m also having a giveaway for tickets sponsored by MasterCard to watch
Shakespeare play, Merchant of Venice at Fort Canning on 4th May! 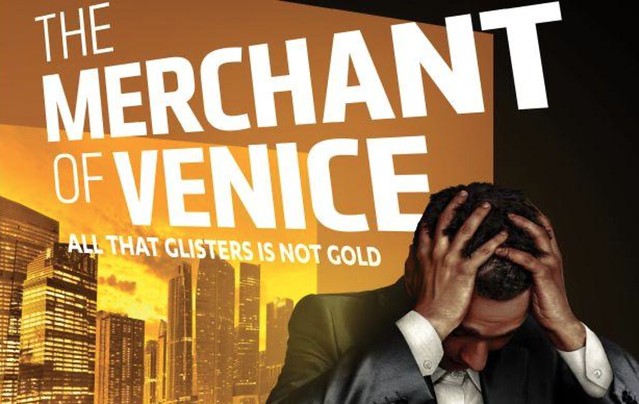 Merchant of Venice and myself goes a long way back because it was my literature text
back during secondary school days!
Perhaps that is why I named the mascot of The Tiramisu Hero Sir Antonio and
always wished my Mom named me Portia instead of Peggy because the former is such a beautiful name! :p

I previously watched Macbeth at Fort Canning and it was such a priceless experience
being able to sip champagne and watch Shakespeare under the stars!

You may find out more about Merchant of Venice on the MasterCard Priceless Singapore site.

Leave a comment at the end of this post (do include your name and email address)
and share with me your most priceless moment.
3 winners will be picked by 23rd April, each walking away with a pair of tickets to Merchant of Venice.

Join me for a play under the stars! 😀

*For those who left the comments in the previous post, not to worry – your entries will still be valid.

“Every day, think as you wake up, today I am fortunate to be alive, I have a precious human life, I am not going to waste it. I am going to use all my energies to develop myself, to expand my heart out to others; to achieve enlightenment for the benefit of all beings. I am going to have kind thoughts towards others, I am not going to get angry or think badly about others. I am going to benefit others as much as I can.” – The Dalai Lama I had a beautiful day and I think it's because I had chosen to be open-minded, positive and less critical of everyone (including myself) today. I put 100% of myself into things that I chose to take on, and tried to be mindful of my actions and thoughts. Because every single opinion or thought I have about myself today, regardless how fleeting, will subconsciously change the person that I become tomorrow. 💬 🖤
I couldn't agree more.
The housemate is out and the acoustics of the living room turned out to be pretty good haha. My day starts at 6.15am and ends at around 6pm. I get a 2-hr brunch break everyday which I so, so cherish - time for me to do whatever I need to do to feel normal, like entertaining myself this way haha. It'll soon be the longest that I've been away from home on my own. Strangely, I haven't really started feeling anxious about it yet so that's great. Can't believe I'm learning how to be on my own at this age. I bought 4 cans of beer as an emergency stash and I cracked the first one open last night. (I'm obviously not doing any form of detox lol) Kinda looking forward to the weekend, but also kinda not looking forward to it. 🤷🏻‍♀️ What am I gonna do with all that time?
First time trying this, with people that I've just met. (everyone was so nice! 😭) I had such a great time and all the awful scenarios that I imagined in my head didn't actualize. It was a bunch of strangers doing their thing at the beach. I was interested, but I.. didn't dare to ask / didn't want to impose / will ask next time. It's true. If I remain inconfident, uptight or incessantly worried, I would have missed all that fun (and perhaps also miss many, many other things that life wants to offer me). #butdidyoudie @thisismeish & @stanislavsalienko, you guys are so cool. Hehe. Thanks for everything!
How precious is the time we have here in this world. 🐞
No better place to do yoga poses with bird names. Haha! 🦅 Eagle's or crow's nest? :p Anybirdy home? #garudasana #bakasana